A new real-time strategy game called Stormrise is currently in development at Creative Assembly for the PS3.

Sega who will be the publisher of the game says on their web-site, “Experience the heat of the battlefield by leading your troops from the front line, instead of the traditional way of controlling the units from a detached view point”.

It then goes on to say ” The experience is heightened by a simple yet effective control system tailored specifically for consoles, which allows easy unit selection, rapid navigation and precise deployment,” so for those that complain about the lack of mouse on consoles may not have anything to complain about this time.

The plot looks like this:- “Set on a bleak and barren earth, devastated by a catastrophic event centuries ago, Stormrise sees the Echelon and the Sai battling to survive in a hostile and uninhabitable wasteland. Remnants of a superior technological people the Echelon survived the event through self-educed hibernation, whilst the Sai, a more tribal faction, still exist having learnt to adapt to their surroundings and the new environment”.

“Having evolved in vastly different ways, the differences between the two factions have spurred much animosity and hatred between the two races, and the future of the planet is now hanging by a thread”.


The game itself is pencilled in for a 2009 release, and in the mean time you can check out a screen shot of the game below. 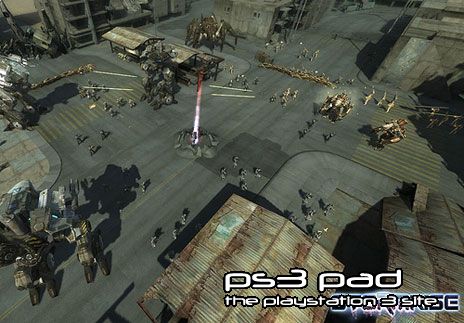