Despite a 16 month disadvantage, Sony have overhauled Microsoft in Europe but in the US the XBox 360 remains in front of the PS3 but the gap is decreasing.

Due to initial production problems Sony decided to release the PS3 firstly in the US in late 2006, with the European launch four months later in Spring 2007. This decision was proved correct as even with the delay, and a massive head-start of one year and 4 months in Europe – the Sony PS3 is now leading the XBox 360 in the next generation battle.

Sony is the first of the two companies to shift 5 million consoles in Europe. 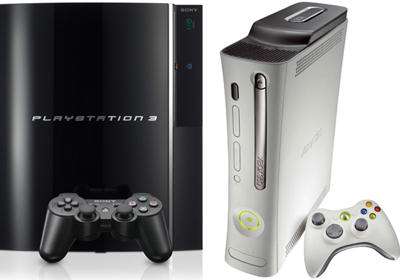 In the United States however there are now 10 million XBox 360’s in consumers hands. This compares to just under 5 million PS3’s.

Microsoft is hailing the 10 million barrier as proof that the XBox 360 has won the next generation console war.

But hold on one moment.

The PS3 is not only ahead and extending the lead in Europe but is outselling the XBox 360 in the United States according to data from the last few months.

Europe has chosen the PS3 already – the US is catching up.

(Oh and obviously the Wii is outselling them both!)