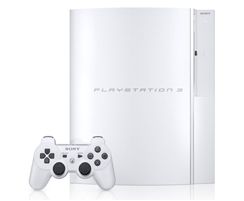 ‘Uber-kitsch’ some may say, ‘Horrifically tacky’ some other might but the White PS3 looks destined for our shores at some point this spring.

Suitable for, erm, rooms with lots of white – the White PS3 is currently only available in Japan but appears set for the US according to Federal Communications Filings in the States (this happened with the 40Gb PS3 about a week before it was launched too).

A European debut will no doubt arrive shortly after too and then Apple iMac owners worldwide with scream with ‘de-white’!