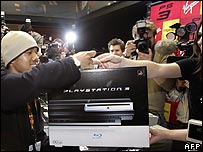 Sony is not cutting the price of the PlayStation 3 in Europe, but will offer free games and accessories instead.

There is also no word of plans for an 80GB version of the console in Europe.

In Europe gamers will get a “starter pack” at an unchanged price of Â£425 for the 60GB machine, with two games and two controllers included.

The new pack was announced at the E3 games conference in Santa Monica, in California. Sony says it is offering gamers Â£115 worth of added games and controller, for no extra charge.

But the firm could face criticism from gamers for deciding not to reduce the price of the 60GB PS3 and not announcing the 80GB machine.

Earlier this week, Jack Tretton, chief executive of Sony Computer Entertainment America, said he thought the US price cut would at least “double” the sales of PS3 in the country.

But in an interview with games website Gamesindustry.biz, David Reeves, president of Sony Computer Entertainment Europe, revealed that once the stock of 60GB machines was sold out in the US – probably by the end of July – the model would no longer be sold.

That would mean that US gamers would once again have to pay $599 for a full-spec console with features such as wi-fi, not available on the cheaper 20GB model.