One of the PlayStation’s favourite game brands is heading to the PlayStation 3. The game will be released on December 7th 2007 and will be available either with mics (RRP Â£44.99) or without (RRP Â£24.99).

Read the full preview below and then find out to pre-order and get 15% off those RRP’s on one of the PlayStation’s best multi-player games.

The game arrives with around 30 tracks, but you will be able to download as many as you want from the PS3 Online Store. Around 350 tracks will be available at day one with more being added all the time.

The initial 30 songs on the disc cover a wide range of genres from the 80s to now.

If you have any of the PlayStation 2 SingStar games you will be able to ‘unlock’ these tracks to use on your PS3 too!

Undoubtedly, though, the SingStore is the real attraction. It’s like iTunes, essentially – an online shop where you can search for your favourite songs and download them to build up your very own library of SingStar tracks.

Sony has yet to release figures on how much each new track will cost to download (although we have heard rumours ranging from 75p to Â£2.99)

The other major new feature introduced by SingStar PS3 is My SingStar Online – it’s a social networking service, essentially. If you’re familiar with MySpace, Facebook or any of those other sites used by today’s youth (and today’s grown-ups “because of the music thing”), you’ll be right at home.

On your My SingStar Online profile page, you can post a picture of yourself, list your favourite artist and favourite song and pick a flag to show which country you’re from. Your high scores will be displayed, along with comments other users have left for you.

Then there’s room for photos and videos you’ve taken using the official PS3 camera or any of the web cams SingStar supports from third-party manufacturers. Snapshots are taken automatically when you’re singing a song, and you can also grab your own at key moments. Then it’s a matter of saving them to your media gallery and stick them on My SingStar Online, with the option to restrict viewing to those on your friends list if you’re shy.

As a SingStar PS2 owner (yes I have ALL the discs) I look forward to this new SingStar version. Although after a couple of drinks down the pub, you know how everyone loves hogging the mics, it could become an expensive business when you ‘have to’ download every song in one night!

You can order SingStar PS3 now at a discount. 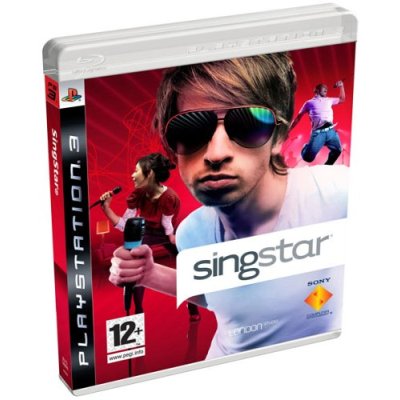