Da Da Da Daaaa, Da Da Daaa, The world that is made of those fun and lovable plastic bricks is back once again thanks to Travellers Tales with LEGO India Jones: The Original Adventures based on all three of the original movies. The previous LEGO games based on the star wars universe were all very successful games and this new entry should be no different. If you have played any of the previous titles, then you will feel right at home with the games concept and control methods, however you obviously will not have the powers of the force at your disposal this time around, but instead the iconic Indiana Jones whip plus many more items and vehicles which now handle much more tightly than in previous games can be had.

The game focuses more on the adventure aspect this time around with much more emphasis on finding keys to unlock certain areas to allow you to progress to the next. There are many platforming aspects to the game (as you would expect), that take place in many varied environments throughout the course of the original trilogy of films. One thing that stood out for me while playing this game is that when you are busy trying to get from A to B and traverse many obstacles (which is hard enough), there are many traps that are out to get you during the all important nail biting moment which adds to the games difficulty. There are times in the game that will challenge most of the casual gamers out there.

The game features the usual drop in/out play mechanism for another player to join in if they so wish, just as you could in the previous LEGO starwars games which adds to the fun factor while playing the game. This is one aspect that has always been a symbol of the LEGO incarnation of games that is their humour. Many of the well known sequences from the Indiana Jones movies may be changed ever so slightly to put a smile on your face, such as the moment where Dr Jones has just escaped the huge rolling boulder and is then asked to hand over the gold statue. He reaches into his bag and begins to pull all sorts of weird and humorous things out such as C3PO’S golden head which is a nod to the previous set of games.

Treasure chests can now be found around the game instead of the usual mini kits with approximately 10 per level. If all of these chests are found then there is supposedly a secret available at Barnett College.

New moves such as being able to use Indy’s whip to latch on to objects that are just out of reach allows you to pull these objects closer to gain access, or you can also use the whip to traverse huge drops by attaching it to well placed hooks above your head as you jump.

Just as in the previous games, one of the game’s main objectives is to find as many little studs as you can to eventually earn the true adventurer title. Each character has their own unique abilities to help you do this which will be needed at some point during the levels, and so you will find yourself constantly trying to decide which character has the best ability to deal with a specific situation.

All of the LEGO series of games are played often here at PS3pad.com and i am sure that this incarnation will be no different. It may just be me but the graphics look better and more polished than the StarWars games did which is no bad thing. The game is enjoyable to play and when enacting some of the famous scenes from the movies with the added humour always puts a smile on my face. The game has enough to keep both the hardcore gamers satisfied with extra unlock-ables for their dedication and casual gamers with its ease of pick up and play. We highly recommend this game to anybody who is currently on the fence wondering if they should buy it or not. Roll on LEGO Batman.

The cheapest price for this game can be found using our new price comparison page, for various retailers if you are on the look out for a bargain. 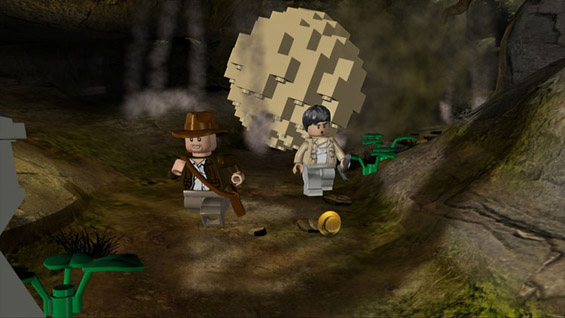