Resistance: Fall of Man was another title that received great press when it was released along side the PS3 console upon release. The game was built from the ground up especially for the PS3 itself, which shows greatly by the graphics and physics seen on the screen. It is a first person shooter released by Insomniac Games, which is set in the 1950’s era in an alternate history in the united kingdom, which mainly takes pace among others around the area of Manchester.

Weapons are both accurate representations of real weapons used at that time, and also a hand full of futuristic weapons, which prove much more powerful and satisfying when used. These include a multitude of guns, grenades, as well as melee attacks. The PS3 controller is used to good effect in allowing the player to ‘shake off’ attackers, by shaking the pad from side to side, which can also be used to shake off flames in multiplayer mode. 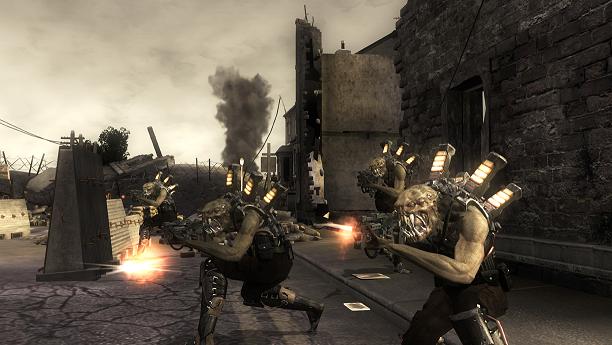 Fall of man was a game that I personally have fond memories of, due to the fact that it was the very first game that i bought for my PS3. It was, and still is, very entertaining in single player, but it is the multiplayer where the game has its lasting appeal. Matches are frantic and fast, and are always fun to play, especially with people who you know. The graphics are great too, especially for a launch game, and goes to show that from early on, Insomniac Games have a talent at harnessing the power from new technologies.